Like anyone into synthesizers it was just a matter of time.

I think I started to flirt with Eurorack synths when Venetian Snares put out Traditional Synthesizer Music back in 2016. That love affair then became amplified when I got more into functional programming with the rest of the dev world.

BUT HEY EURORACK IS EXPENSIVE (I said to myself)

So I continued to admire other's systems from afar. But once Teenage Engineering released the PO-400 I had to jump on it, I was already a huge fan of the OP-1 and the PO series.

So I bought it and built it. It was kind of a "toy modular" so I figured it would be a (relatively) low cost to see if I could acually have fun with the idea of modular synthesis before investing in a larger system. 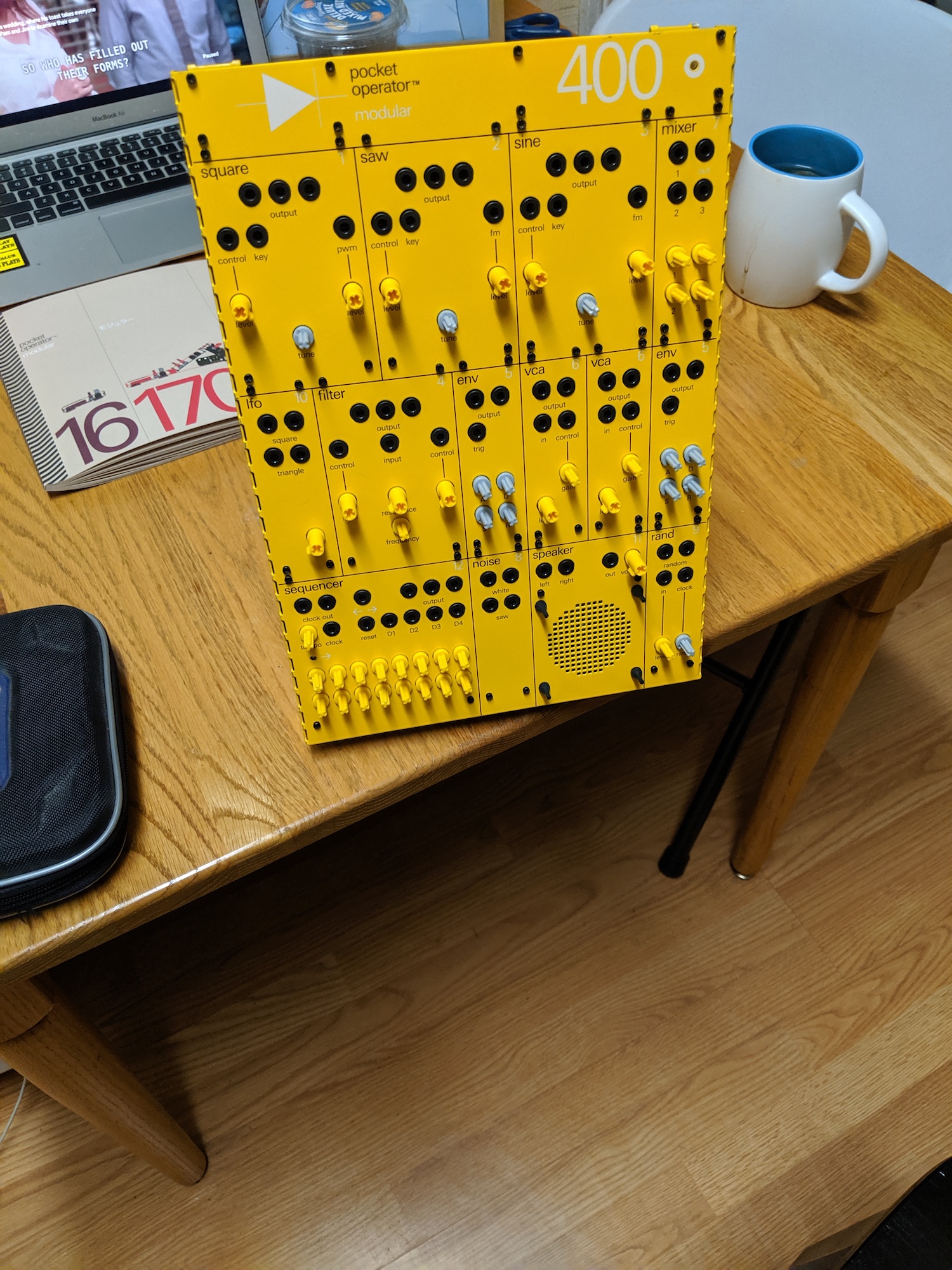 Surprising no one, I had a lot of fun with this thing and the result was clear to me: at some point I would get a proper case and start getting proper modules.

I poked around for a while trying to decide what size and style to get myself. I ended up going with a lovely and unique feeling case from Case From Lake 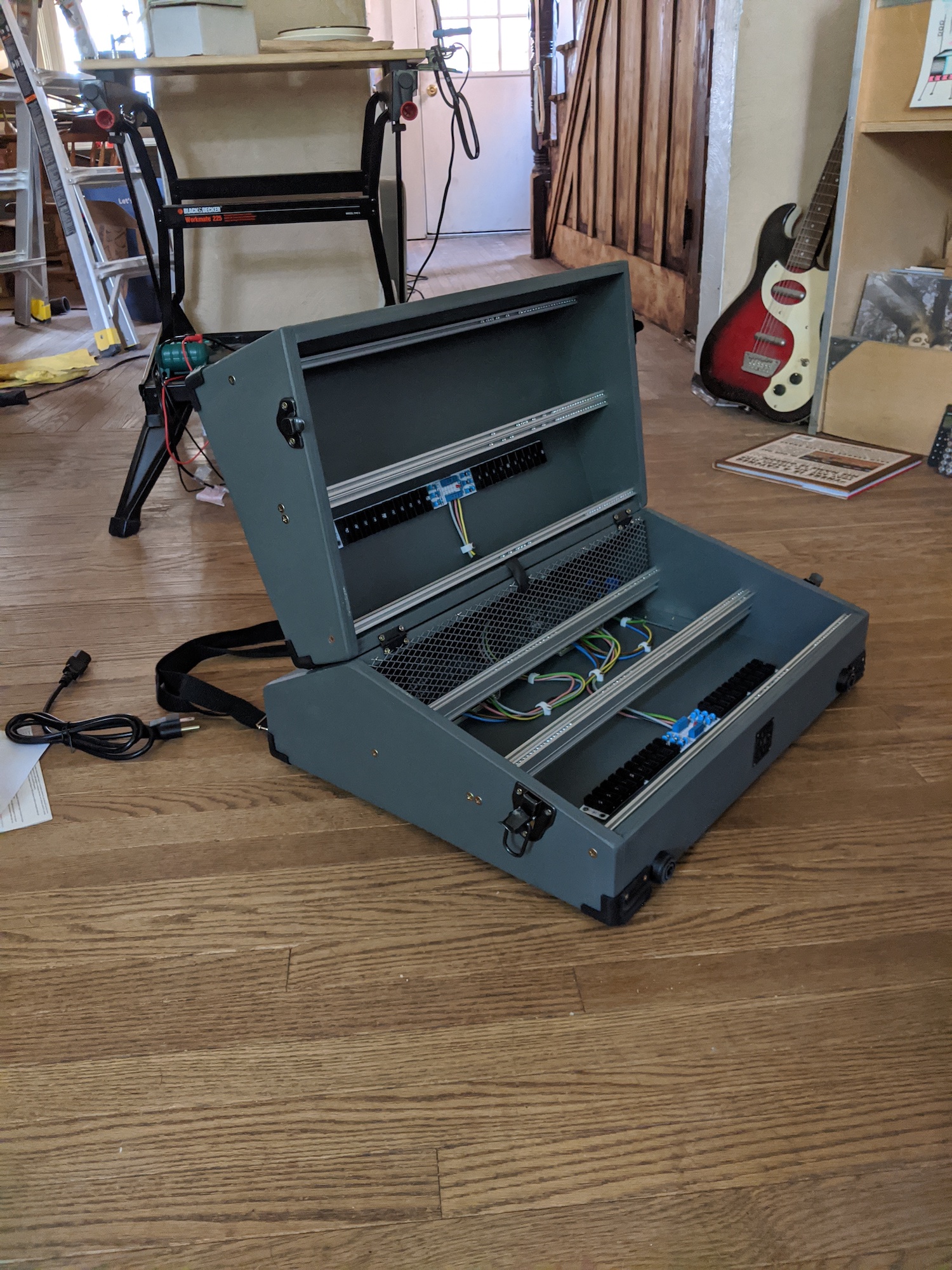 So far I really like this guy, it has lots of room to grow, it folds up all nice, and it looks rad as hell! If you're in the market for a case ever, give this guy a holler on etsy.

This was tough for me -- I really wanted my first module to be an analogue, very "pure" and "big" sounding VCO. Like, I wanna fuck up the signal real bad with other whack modules but I want it to start squeaky clean.

So mostly I just spent evenings looking up different VCOs and video/audio samples until something struck me. Eventually that strike came from Birdkids' The Bateleur 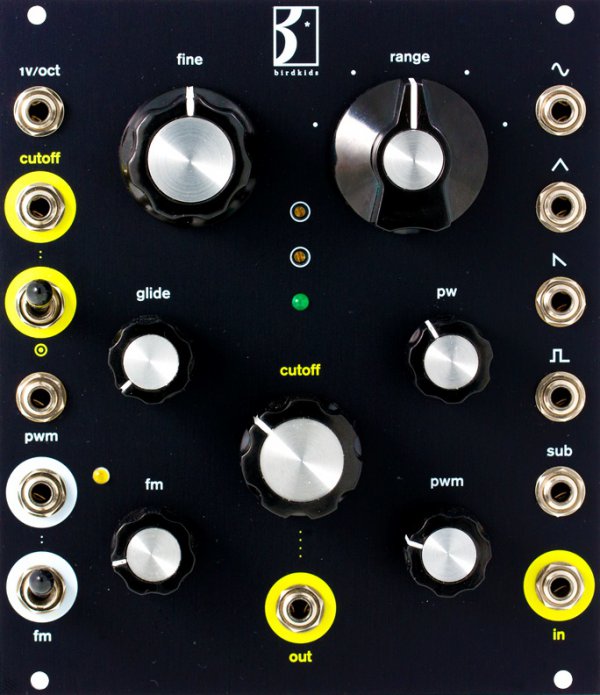 So once I found a good deal on a second hand unit, I pounced! 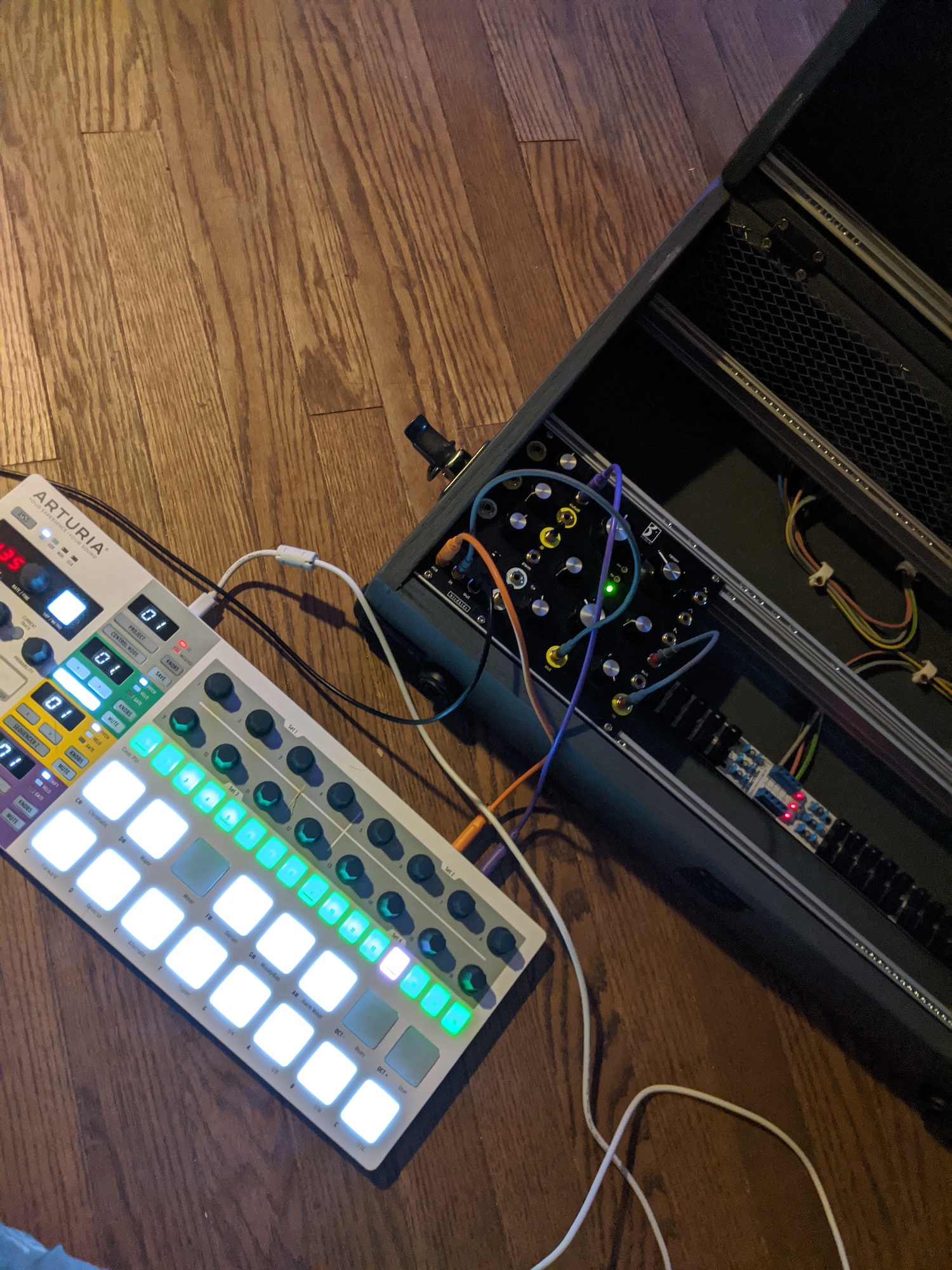 But as great as it sounded it was tough to do much with just the VCO. Luckily the expansion has a VCA built in and the main unit has a filter built in, but we're still missing a lot of utility modules that would make this a lot more fun.

Which is when my sly ass looked over at the PO-400 with hungry eyes. I had read in the documentation that it operated on Eurorack voltage levels...if I could steal a few VCAs, Envelopes, I'd be a little better off until I could afford more "proper" modules.

So I started to spend my evenings removing the 'modules' from the PO-400 and scaling them up so they would fit into the standard case 3U rows.

I did not set out to do a pretty job, that much is clear.

I grabbed some blank PCB boards I had lying around and started using all the wrong tools to hack them into face plates that I could bolt the PO-400 mini-modules onto, starting by tracing the size of the Bateleur's expansion module faceplate: 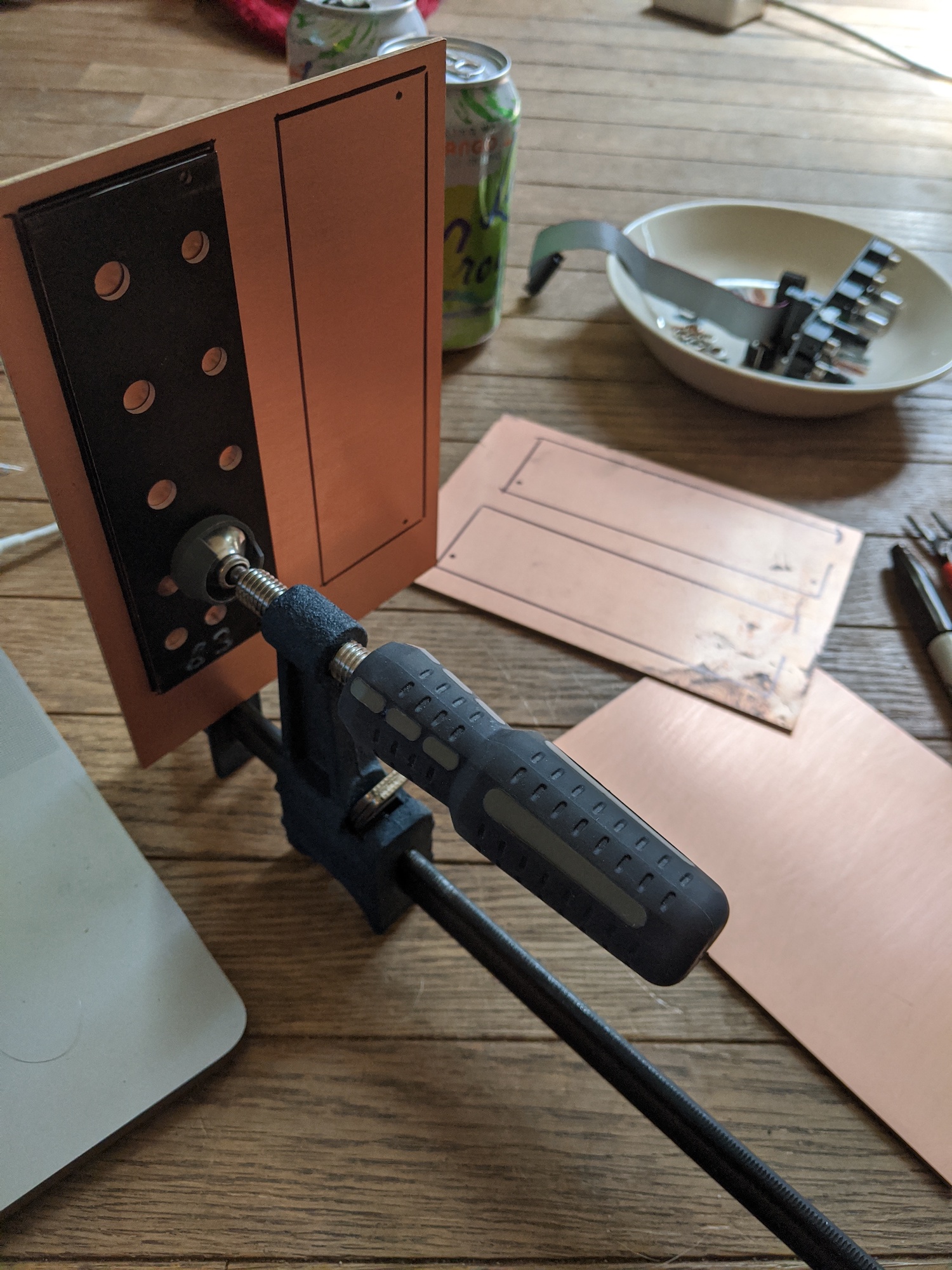 To the cutting table: 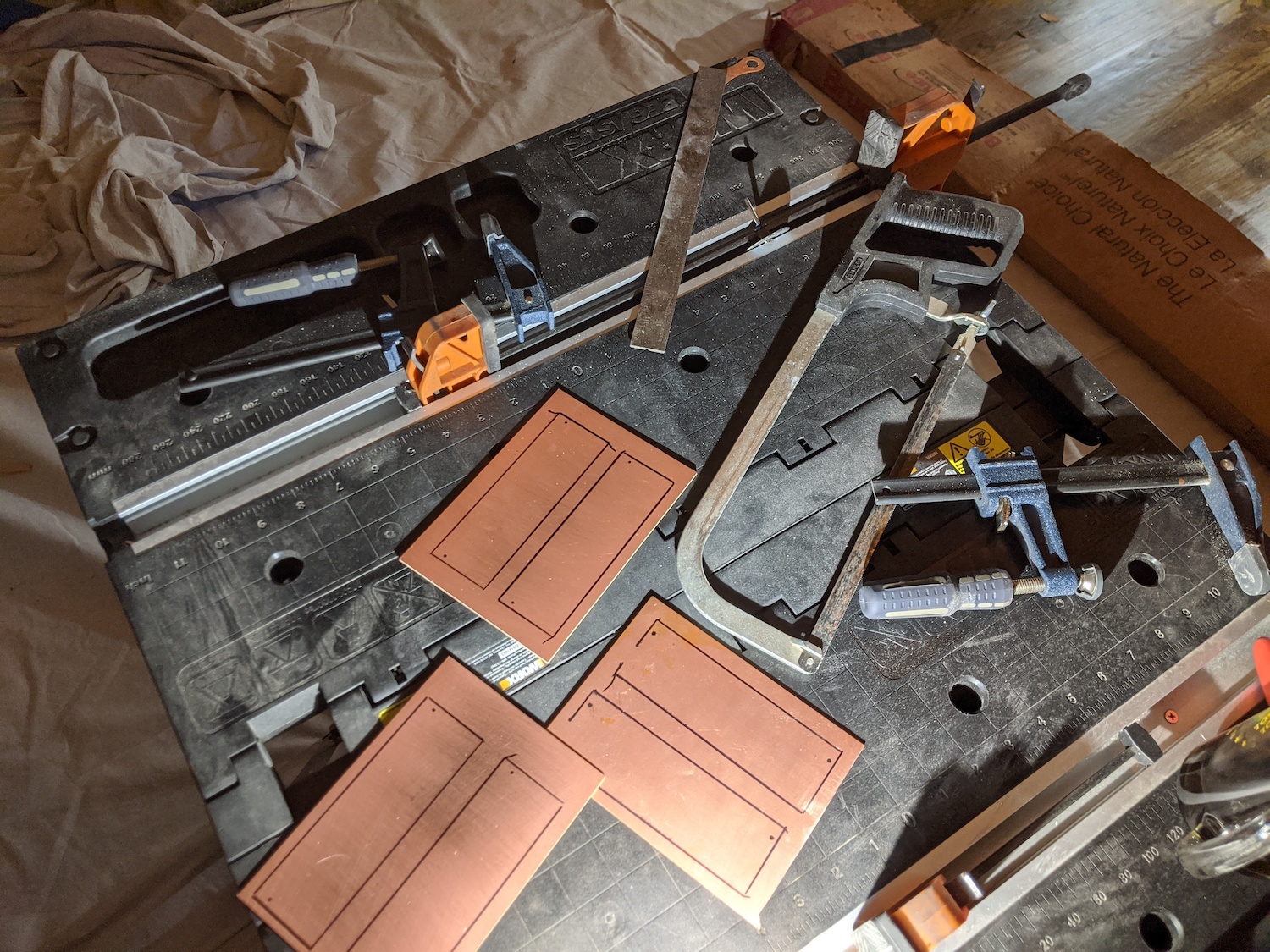 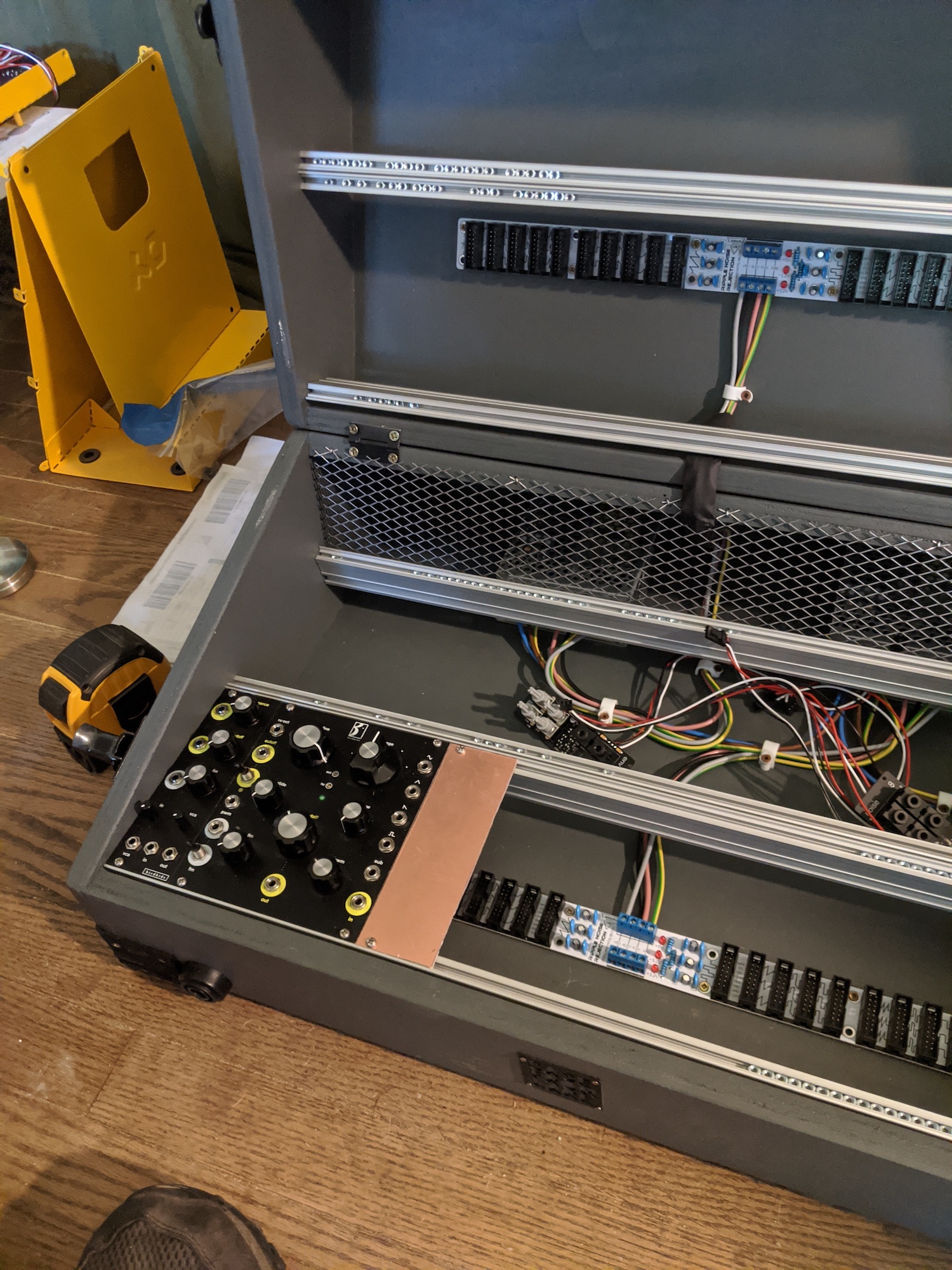 At first I just cut out big squares to fit the controls through: 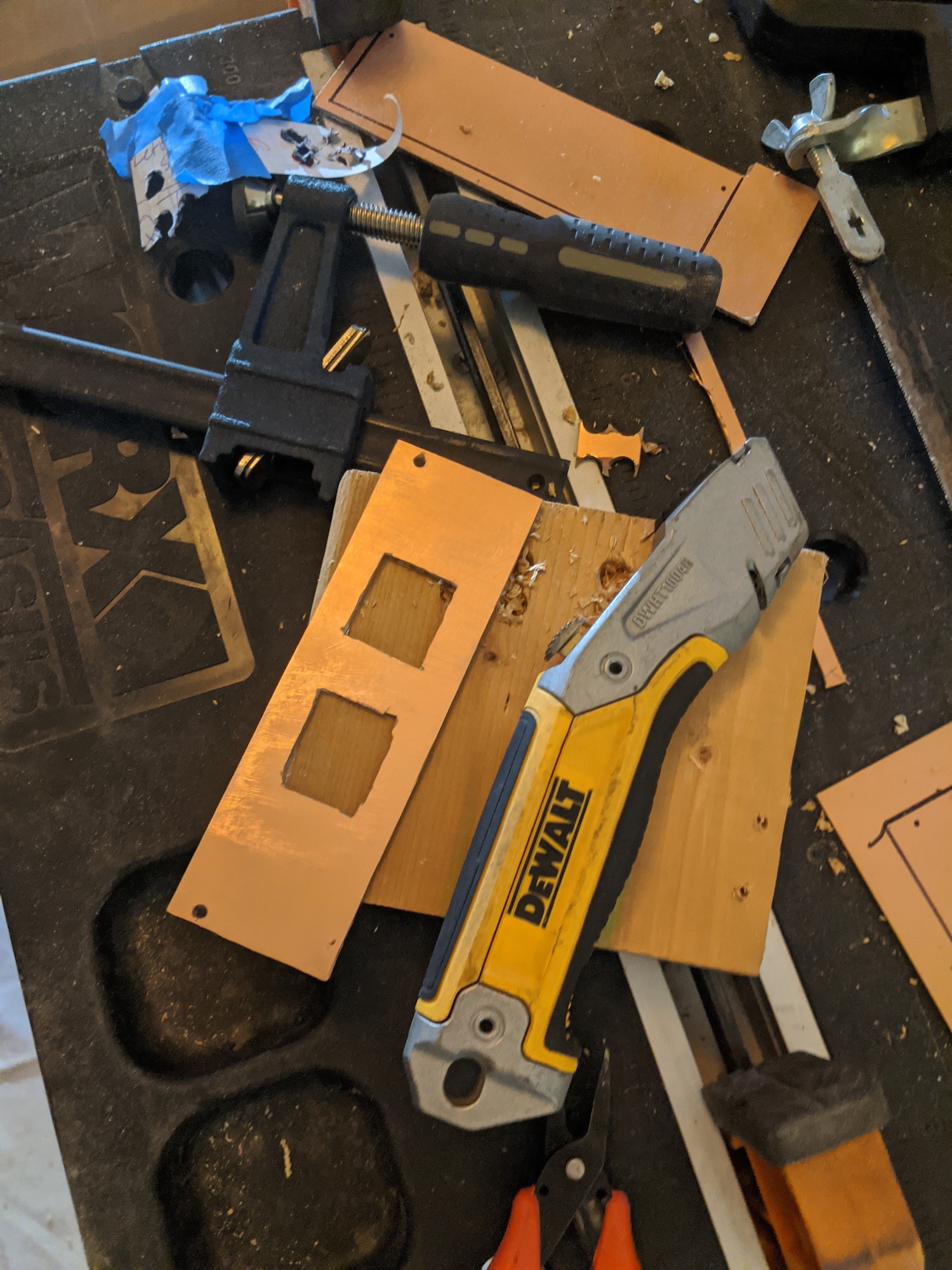 and that was one done! 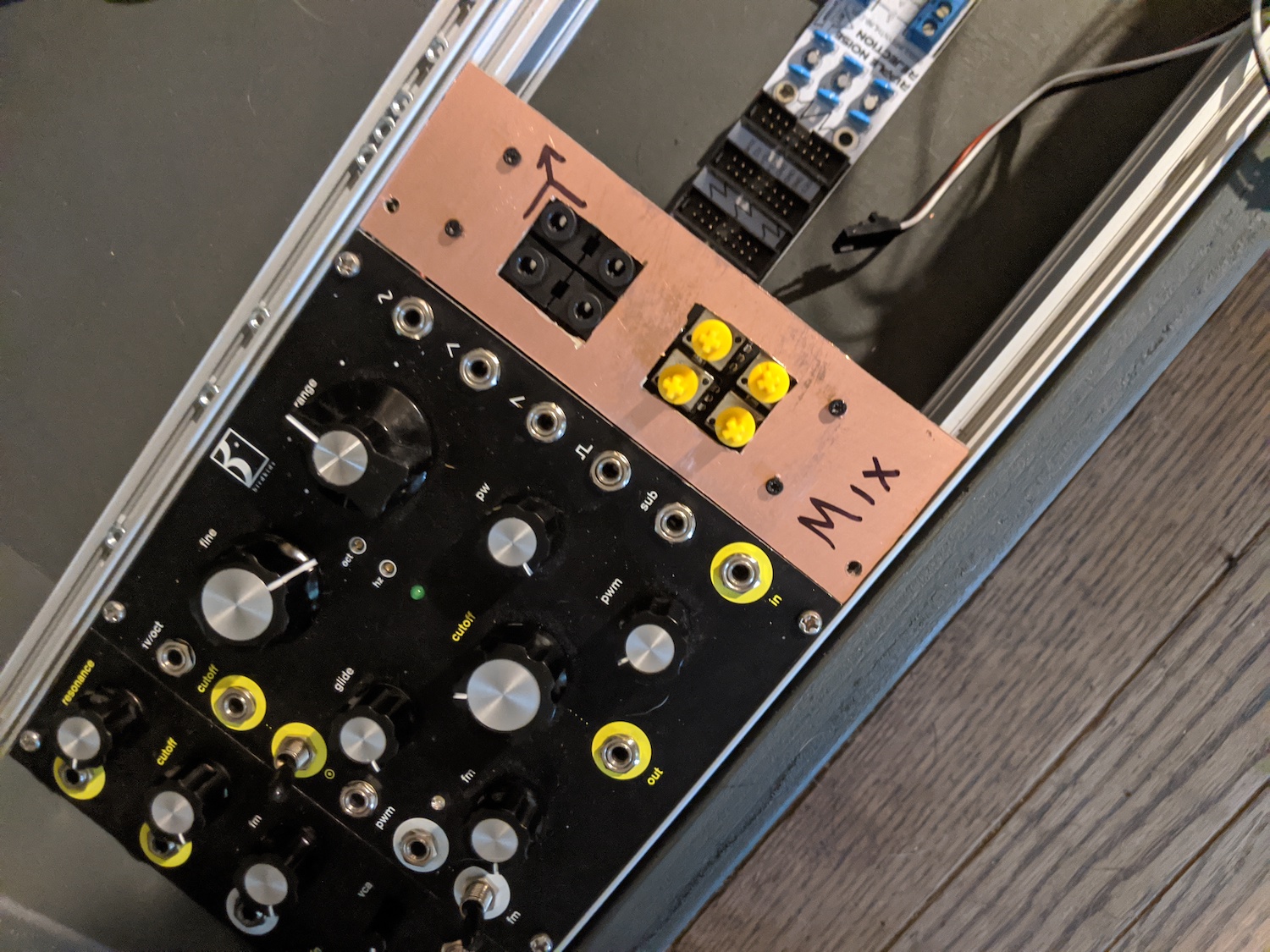 WAIT, I HAVE TO POWER THESE

Eurorack modules typically have 16 pin IDC headers to connect to the power bus board in the case. The PO-400 mini-modules, however, have these little 3 pin connectors going into their non-standard bus board made by TE.

The good news is that the modules do use standard Eurorack voltages, with those three pin connectors carrying +12v, -12v, and GND.

I could solder those wires into a sad, empty 16 pin header but then I'd have to do that for every module and I'd have to wait for a supplier to ship me the headers and the ribbon and I'm here to have fun as fast as possible.

What I decided was 'better' was to take the entire power bus board off of the PO-400 and piggy back that off of the PSU in the case. This way I really only had to modify the PO bus board cabling and could use the connectors already on the mini-modules to jack into the power through the PO-400 bus.

It worked and I'm a genius for sure (I decided) 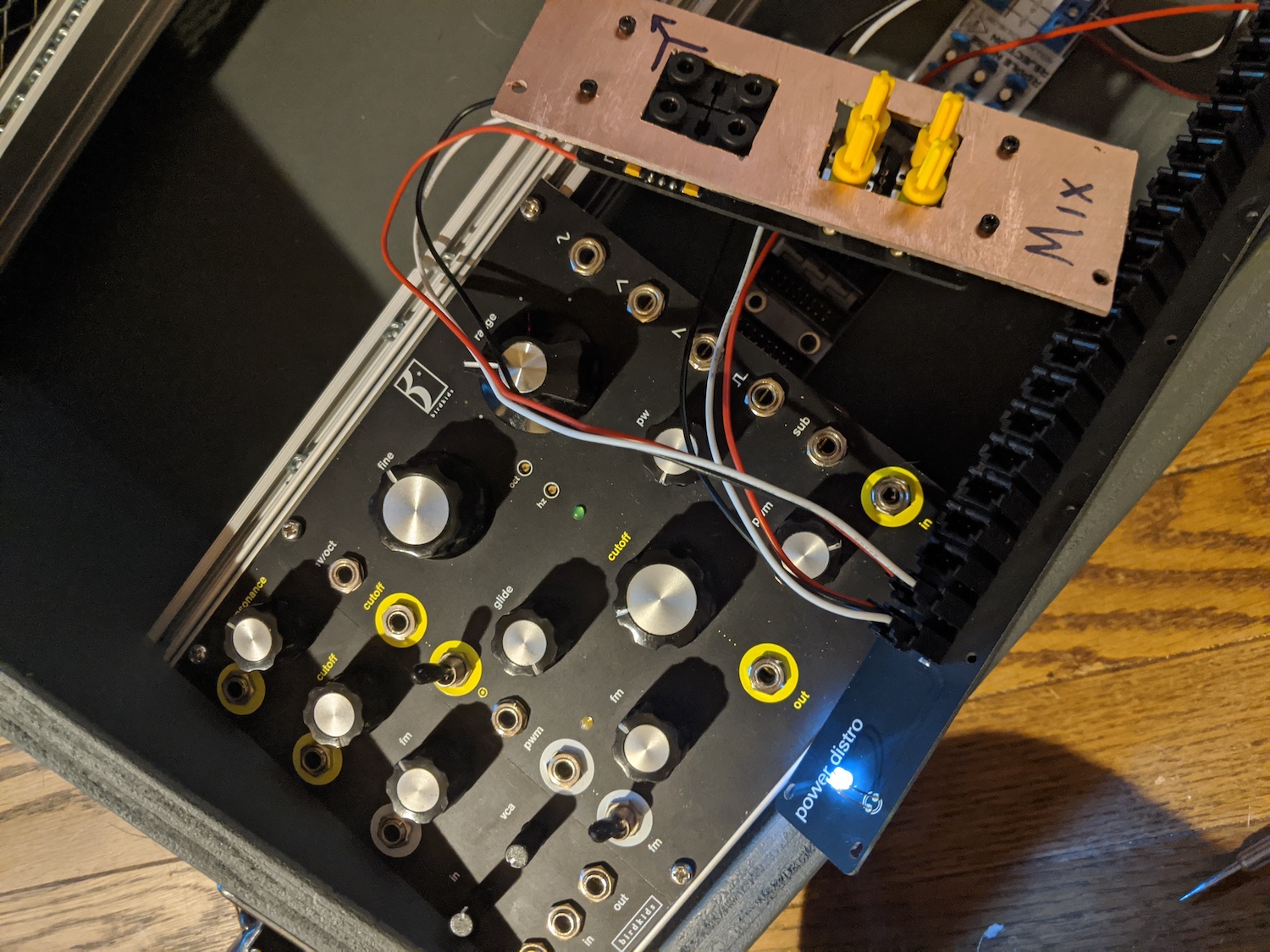 this post is already too long. Here's some pictures of all the converted mini-modules in the case with the "proper" VCO! You can see I got a bit better at drilling out holes for the module controls. 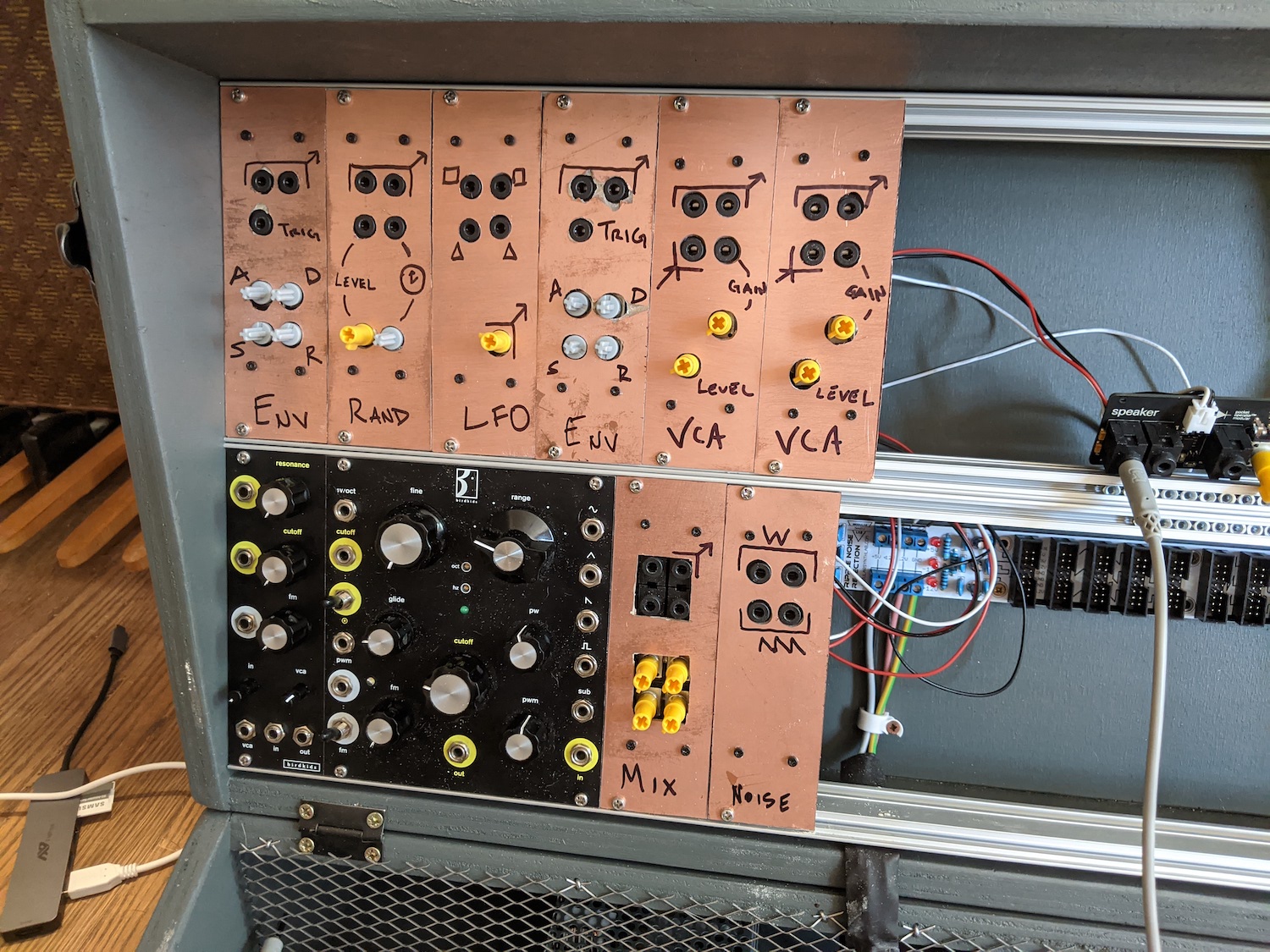 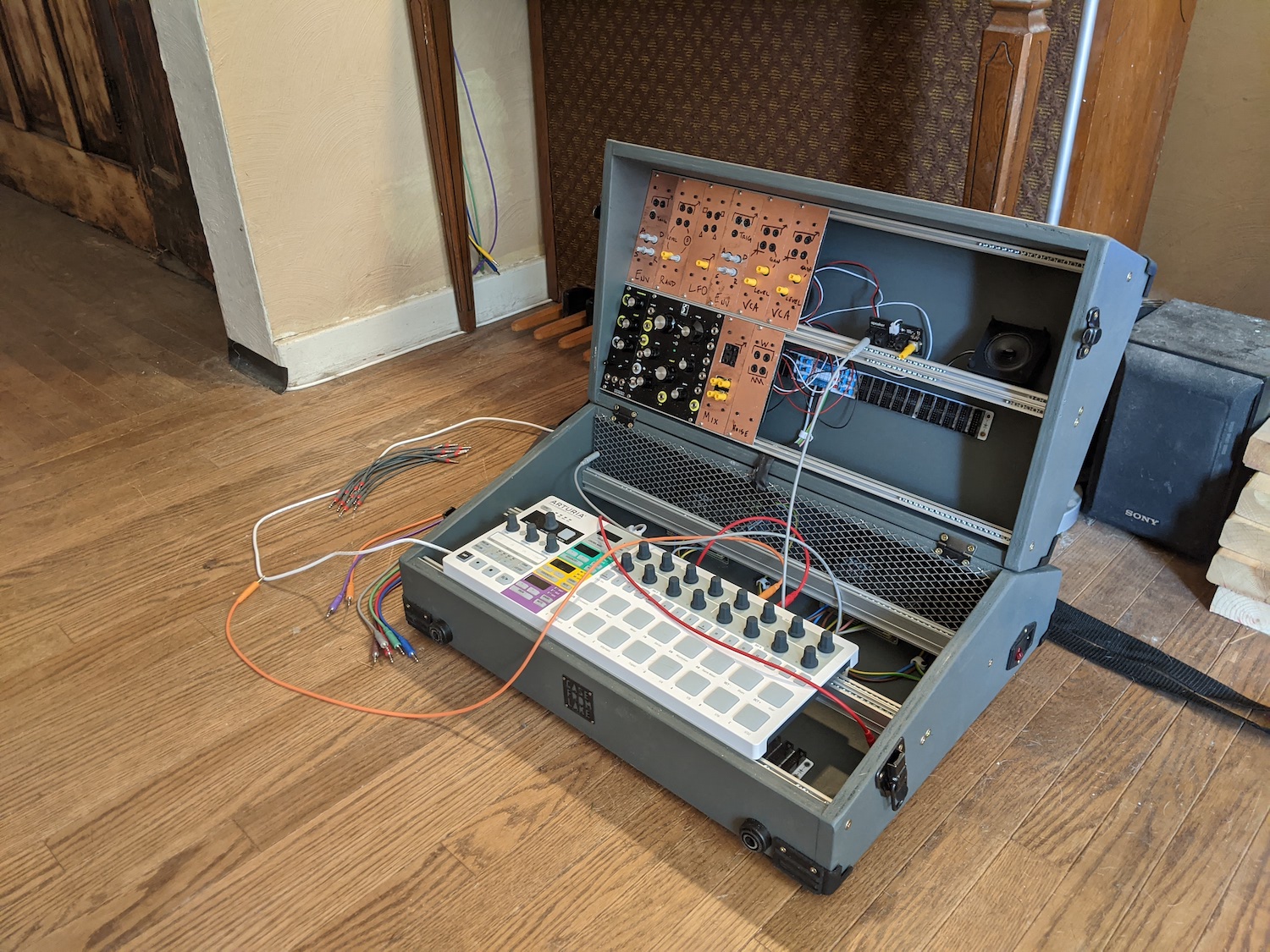 I'm looking forward to getting better modules to replace these, but it's nice to have them in the mean time for 'free'